As pet food companies continue to strengthen their efforts to maximize the quality and safety of their products, the issue  of mycotoxins in raw materials has risen to the top of their priorities list. The prevention of mycotoxin contamination in the grain components of animal diets is not only an essential goal, but also an immense challenge that requires the combined efforts of pet food manufacturers, their supply chain partners, and the laboratories that test their products. Both the urgency and the difficulty of this shared task lie in the chemical properties, physical characteristics, and complex interactions with environmental factors that define mycotoxins as a persistent and notoriously elusive threat to the wholesomeness of grain-based pet food ingredients.

Mycotoxins are poisonous chemical compounds produced by molds. Their occurrence spans every growing region in the world, every phase of the pet food production chain, and the entire gamut of whole grains and grain byproducts from corn, barley, and soybeans to corn gluten meal, wheat middlings, and distillers’ dried grains with solubles (DDGS).

A global survey conducted between 2004 and 2013 uncovered mycotoxin contamination in over 76 percent of 25,900 samples of grains and grain byproducts destined for animal diets.¹ These statistics reflect the omnipresence of the soil-and airborne molds that generate mycotoxins as well as the difficulty of controlling all of the factors that favor mold growth. Toxigenic molds are most likely to proliferate in grains that are damaged by insects, hailstorms, or drought stress or exposed to high temperatures and moisture levels. Infections can occur both before and after harvest. Grain stored in damp, dirty, or poorly ventilated areas in silos, mills, or transport vehicles is at particularly high risk for mold infection.

Once these fast-growing molds gain a foothold in a storage or production facility, there are few good alternatives to removing  the materials that harbor their toxic metabolites. If mycotoxin concentrations exceed FDA guidelines, entire lots may need to be discarded. FDA rules generally prohibit grain dealers and pet food manufacturers from blending highly contaminated ingredients with clean grain to reduce mycotoxin content to acceptable levels. While mold reduction strategies such as drying and irradiation can help limit the spread of contamination, they’re much less effective at destroying the mycotoxins that have already formed.

As a result, significant levels of mycotoxins can lurk unseen in lots with no visible mold growth. Heat processing is also likely to leave a substantial proportion of these highly stable chemical compounds intact. Some types of processing actually increase mycotoxin content. For example, the processes that create DDGS and many other grain byproducts tend to concentrate mycotoxins in those ingredients.² Detoxification methods such as ozone and organic acid treatments as well as feed additives that bind to or degrade mycotoxins in an animal’s gut also come with limitations. All of these methods are relatively costly. Some may also reduce nutrient content or form toxic residues.

RAISING THE BAR IN HAZARD CONTROL

The mycotoxins that most commonly occur in grains are aflatoxins, deoxynivalenol (DON), fumonisins, ochratoxin A (OTA), the T-2 toxin and zearalenone (ZEA). The most toxic mycotoxin, aflatoxin B1, is the most carcinogenic naturally occurring substance known. Even in doses low enough to be measured in parts per million (ppm) or, in some cases, parts  per billion (ppb), these toxins are potent enough to cause acute illness in susceptible animal species. When consumed in very low doses over the long term, they can result in chronic health problems, including cancer, food refusal and weight loss, organ damage, neurological disorders, and decreased resistance to disease. In the European Union, all six of these mycotoxins as well as the HT-2 toxin are subject to maximum or recommended limits. At present, FDA mycotoxin guidelines are confined to aflatoxins, DON, and fumonisins. (See Table 1.)

As a growing number of pet food companies have already realized, compliance with current guidelines may fall short of full coverage of the risks surrounding mycotoxin- contaminated pet food. Mycotoxin sensitivity can vary significantly across age, species, breed, and general health status. Yet with the exception of rabbits and horses, the FDA guidelines that apply to pets don’t account for these differences. The guidelines also fail to address another important consideration. Grain ingredients typically contain a mixture of mycotoxins. Mycotoxins that commonly occur together often interact with each other in ways that can dramatically increase their toxicity. Consequently, the negative effects of ingesting a mixture of two or more mycotoxins can be significantly greater than those of consuming each component of that mixture separately.

Examples of highly toxic combinations include pairs of chemically similar mycotoxins such as DON and nivalenol and the T-2 and HT-2 toxins. For customers whose pets may have a heightened sensitivity to mycotoxins as a result of advanced age, frail health, or the genetics of their breed, even trace levels of these mixtures are a cause for concern.

In response to these risk factors, many companies not only test ingredients for a full range of mycotoxins but  also maintain tighter restrictions of their levels than those proposed by current regulatory guidelines. To confirm raw materials meet their quality and safety specifications, these companies often require supply chain partners to provide a certificate of analysis (CoA) that includes a detailed mycotoxin profile, which will then be checked against test results from their internal or contract laboratory. With the passage of the Food Safety Modernization Act, comprehensive laboratory data are playing an increasingly vital role in documenting the geographical source of pet food ingredients and verifying the observance of industry-standard safety practices across the supply chain. In addition to helping ensure regulatory compliance, this information serves as reassuring evidence of product safety for pet owners.

Frequent monitoring of raw materials benefits every member of the supply chain by not only minimizing the economic and legal risks of contamination, but also demonstrating a proactive approach to hazard control. Routine checks of mycotoxins levels can lead to significant process improvements in storage, milling, and manufacturing facilities. Timely discovery of an uptick in contaminant levels may point to problems such as a leaky water pipe, dirty storage bins, or inadequate attention to rotating stock that indicate the need for internal practices that will help prevent future outbreaks.

The success of these stricter safety measures hinges on  the quality of the mycotoxin data generated by a company’s monitoring program. Without a strategy based on a clear understanding of the complexities involved, the goal of accurately estimating mycotoxin concentrations in large grain loads can prove difficult to reach.

One of the most important factors a testing strategy must account for is the uneven distribution of mycotoxins in grain lots. Mycotoxins tend to occur in tiny, widely scattered pockets of damp or damaged grains. A sample collector  who takes a single scoop of grain from the top or side of a load runs the risk of either missing the contaminated kernels completely or gathering materials that contain concentrations of mycotoxins that far exceed the average values for the whole lot. GIPSA-recommended sampling procedures compensate for these risks by calling for a representative sample that consists of incremental subsamples from multiple locations in the lot. GIPSA also advises collecting a minimum of 2 to 10 pounds of grain, depending on the size of the load, and using proper sampling equipment, such as a hand or mechanical probe for stationery grain or a pelican or diverter-type sampler for a moving stream.³ To minimize the chance of variable test results, the entire process should be carefully documented and followed to the letter by all employees.

The reliability of the test results also depends of the robustness of the test method. One of the major obstacles to accuracy is the difficulty of detecting and measuring ppb levels of mycotoxins in a complex organic matrix. Grains and grain byproducts contain a diverse array of nutrients and plant chemicals that may interact with the sensitive antibodies that immunoassays use to detect mycotoxins, producing false-positive or false-negative results. Methods that call for purifying the sample before measuring the mycotoxin levels can help minimize these matrix effects. However, methods that require a lengthy, intricate sample preparation process can increase the chances of procedural errors.

Whatever their cause, the repercussions of false negatives and false positives are extremely costly. Accurate mycotoxin data are critical to a company’s ability to identify which shipments of grain should be rejected and which batches of raw materials need to be treated or discarded to prevent the spread of contamination. The wrong call could lead to losses of valuable resources, time, and raw materials or, in a worst- case scenario, a finished product that contains unsafe levels of mycotoxins.

THE VALUE OF A COMPREHENSIVE, TARGETED TESTING STRATEGY

Once a company has established consistent, correct, and repeatable sampling procedures, it should develop a testing system that not only satisfies the technical demands of quantifying mycotoxins, but also fits its business priorities. Whether the sample consists of whole wheat or corn screenings, the test method should be officially validated for that particular commodity. At the same time, the test must accommodate the company’s budget and deliver accurate test data where and when they’re needed.

Massachusetts-based test developer VICAM, A Waters Business, offers a range of GIPSA- and AOAC-approved test kits that are specifically designed to empower pet food companies and their supply chain partners to implement practical, cost-effective frequent monitoring programs. The core of its portfolio is a range of quantitative methods that can be used to determine the exact concentration of mycotoxins in raw materials at critical control points in the production chain. In addition to providing manufacturers and grain dealers with convenient and reliable onsite testing options, VICAM equips analytic laboratories with advanced instrumental methods that afford their pet food industry clients with the highest level of confidence in their mycotoxin data.

Coupled with a portable fluorometer, VICAM’s IA columns  can be used to check mycotoxin levels in incoming shipments, to efficiently prescreen samples for instrumental analysis,   and to monitor raw materials in storage and grain processing facilities and pet food manufacturing plants. This cost- effective rapid method requires no special training and provides accurate ppb measurements in less than 15 minutes.

There’s an IA solution for every major mycotoxin of concern:

The multi-analyte method that delivers the greatest efficiency gains and the most detailed and authoritative mycotoxin data is Myco6in1+ for LC-MS/MS. Validated by the European Committee for Standardization (CEN), this high-powered instrumental method accurately detects and quantifies 12 different mycotoxins, including aflatoxins, ochratoxin A, fumonisins, deoxynivalenol, zearalenone, the T-2 and HT-2 toxins, and nivalenol at or below the strict guidance levels set by EU regulators.

VICAM’s quantitative strip tests combine the speed, affordability, and ease of use with the assurance of accurate numerical measurements. While less precise than instrumental methods, this rapid test is a solid alternative when economical access to real-time data is the most critical factor. No special skills are required for sample preparation or interpreting the test. The test solution develops in as little time as 5 minutes, and results are clearly displayed on the digital screen of a portable optical reader.

Strip tests are an appropriate choice for laboratory and onsite applications that require rapid, informed decision making, including:

MANAGING THE COMPLEXITIES OF MYCOTOXIN CONTROL

Pet food industry stakeholders are well aware of the risks that mycotoxins pose to their financial performance and brand reputation. While many companies are stepping up their investment in the critical task of mycotoxin management, the very nature of these contaminants can complicate their efforts to balance the benefits against the costs. Nevertheless, mycotoxins can be cost-effectively quantified and controlled. As a first step toward accomplishing that goal, companies should develop a knowledge-based strategy that integrates consistent attention to mycotoxin levels with scientifically sound, industry-proven sampling and test methods. 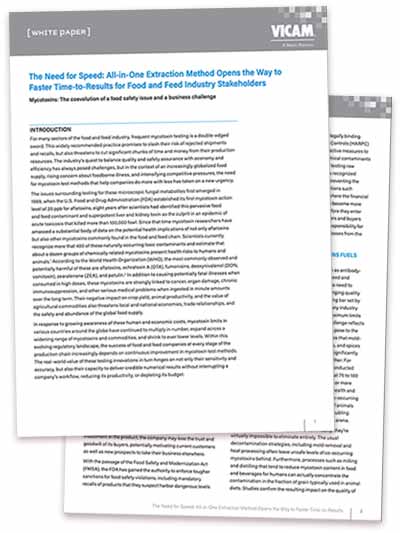