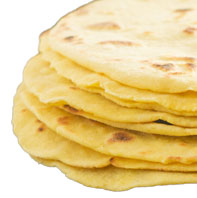 To safeguard the quality of Masa Flour and Tortillas, inbound maize/corn is often screened for the presence of mycotoxins such as aflatoxin, fumonisin and deoxynivalenol (DON).  Cereal grains such as maize/corn, wheat and sorghum are subject to strict EU regulatory limits as low as 2 parts per billion (ppb) for aflatoxin B1, 4 ppb for total aflatoxins, between 0.75 - 1.75 parts per million (ppm) for DON in cereal grains and milling fractions,  and 0.2 – 4.0 ppm for Fumonisin in maize/corn based on its intended use for further milling or as an ingredient to be used during product formulation.  VICAM offers on-site detection tools such as lateral flow strip tests and rapid fluorometry for fully quantitative results at the point of grain acceptance, as well as laboratory sample preparation solutions for use with LC and LC-MS/MS detection supporting finished product quality verification.